I admit it, I am fascinated by British films of the fifties and sixties and the older I get the more that fascination grows.  It would be easy to dismiss this as nostalgia, and in a way that's partially what it is: I am particularly engaged by films set in and around London during this period.  I was born in London and spent much of my first ten or eleven years there or in the vicinity.  In this, I think, lies the answer.  It's the settings that appeal to me: the clothes, the greyness of the fifties and the colour of the sixties, the buildings, the adverts glimsped in the background, the attitudes and especially the cars.  By the age of four I could name every car that went by or was parked on the street.  I don't know how this came about: until I was nine we didn't even have a car, my dad didn't learn to drive till then - but I knew them all.  And I still do when I watch an old British film, marvel at the lack of traffic, list the cars parked at the kerb and the ones that roll by.  In School For Scoundrels, which I watched again recently, there's a lovely seen in a car showroom where A35s and Morris Minor vans are for sale.  Somehow I don't think of them ever having actually been for sale, they're surely just things that were around and now just appear in films.  Did they really have lives of their own, just as cars do today? 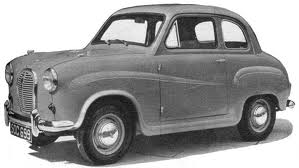 Just watching these old films takes me back to a time of (for me) innocence, wionder and awe, of infinite possibilities, of a world in transition although I had no concept of this at the time.  From where to where? I know now, but when I watch a British film from the fifties or sixties, I can pretend there's still a possibility for a different outcome for us all....
Posted by arunachula at 08:51